Penetrating Conservative Members in the Shadow of the Hangman's Noose

This evening I was one of the guest speakers at the Chairman's Regional Dinner. This was held in the private dining room of the Red Lion in Westminster. According to Wikipedia, the Red Lion is a "favourite haunt of the political elite".  They must have been in another room 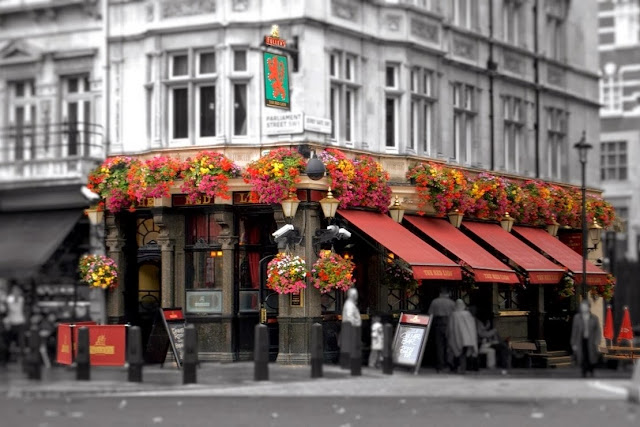 The Red Lion was also one of the favourite haunts of Britain's longest serving hangman, Albert Pierrepoint. Indeed, the room where we were eating was once hired by Pierrepoint for the annual meeting of the British Hangmans' Guild annual get-together. Quite what a group of licensed executioners chatted about at their annual soiree can only be imagined,


"Hey, Fred, have you seen Annie Pierrepoint's new line in hand-stitched executioner's hoods She's got a lovely one in black velvet, with purple piping."
"Yeah, I've got one. You can mix and match with the new range of nooses in the Lord Chancellor's catalogue."
Once upstairs I felt quite at home and settled into a comfortable looking seat at the end of one of the tables close to the door.  Sitting close to the door is an old Agent's trick as it enables you to escape from from approaching bores before they can trap you. The comfort didn't last long, however, when the Southern Zone Oberleutnant pulled rank and sent my scuttling down the room, to the last remaining seat, perched at the end of the top table and sandwiched between Edward Argar and James Tarbit. Now there are worse places to spend an evening than sandwiched between James and Ed, but having the three "naughty schoolboys" sitting in a row was bound to end in tears. James in the party's "do-gooder in chief" responsible for Social Action (or better known as 'nagging recalcitrant geriatrics into painting scout huts"). Ed, I have known and liked for years, but he is somewhat akin to the well scrubbed apple-bearing schoolboy who writes naughty words on the blackboard when no-one is looking.
To cut a long story short, all was going well until the man from Sussex started talking about his KPIs. He had helpfully brought a document with 7 appended schedules to share with us. Two hours in my mind was drifting. To be honest I was stealing a glance at the party's co-Treasurer, James Lupton CBE, and thinking how absolutely normal he looked. Despite being on the Sunday Times Rich List, here he was, squashed onto the top table, eating double egg, ham and chips with the rest of us in "cholesterol corner". Then suddenly I was dragged back into reality.
"I would now like you to turn to Schedule C where I shall deal with Conservative Member Penetration."
There was a moment of delayed silence.
"Now, as you will see from column two, the penetration in Chichester is far deeper than that in Crawley or Hastings where, for historical reasons, it doesn't go quite as far."
I chanced a glance at Cllr Argar, to find him chuckling whilst hiding behind his papers. To my left James Tarbit was holding a poker face, but he clearly thought it was amusing to lean across underlining the word "penetration" - which got Argar sniggering even more. The lovely Julie Iles was by now making strange snorting noises and Richard Robinson was hiding behind his newspaper. Even the Southern Zone Oberleutnant was smiling - and he's had 30 years experience of hiding any emotional reaction to the absurdities around him.
"I don't know what you're all sniggering at" said the man from Sussex. "Member penetration is a perfectly accurate phrase to measure what we have achieved."
It was a hard act to follow.
Posted by Andrew Kennedy at 18:31