An increasingly complex pattern of involvement

Tucked away in Harold Macmillan’s diaries in the late 1950s is an entry about a letter he had received from his Constituency Agent. “Apparently party membership in the Bromley Division has just topped 22,000. This is somewhat satisfactory.”

The fact that 80% of Conservative voters in Bromley were also paid-up Party members is the stuff of our modern dreams, even if the then MP should consider it just “somewhat satisfactory”. I expect the combined membership of Kent, Sussex and Surrey does not match this figure today. It is a sad reflection of how far we have fallen that nationwide there are now just two Associations with over 1,000 members each and only 50 with over 500.

There is much lazy thinking about membership. The most-often quoted is that the decline is a recent phenomenon which is mainly due to the present leadership’s ‘disrespect’ for members. The reality is somewhat different. The following graph (produced by the House of Commons Library) shows membership in steep and steady decline since the 1950s. 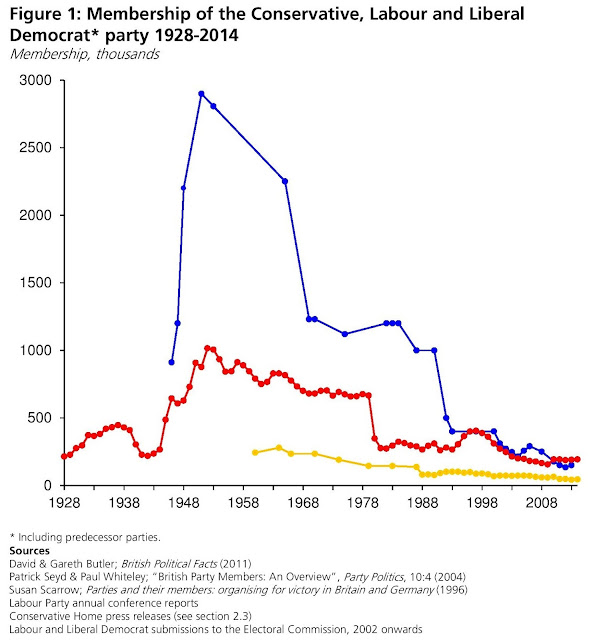 Recently I had the privilege of meeting Tim Bale, Professor of Politics at Queen Mary University, and one of the UKs most respected authorities of political membership and engagement. We discussed the Party’s membership in the following broad tranches;

First is the post-war peak to almost 3 million. This was brought about by (a) the re-establishment of a nationwide Conservative organisation which had atrophied during the war, (b) the Lord Woolton reforms, and (c) an angry reaction from a still conservative country to the defeat of Churchill by a Socialist government.

Stage two was the steady decline over the following 30 years, with the fastest and sharpest fall under Ted Heath in the mid to late 1960s.

Stage four, the fastest and sharpest decline of all, being in the early 1990s, almost certainly attributable to grassroots anger over the defenestration of Margaret Thatcher and the Party’s subsequent decline following Black Wednesday and Maastricht.

Given this period of decline, membership figures under David Cameron’s leadership, both in terms of actual members and the percentage decline, have been remarkably resilient.
Last year I discussed this issue with the West Kent Group Chairman who works in the City. Without exception, every one of his office colleagues, a couple of dozen 30-50 year olds, voted Conservative in May 2015. All wished to see our Party succeed and all agreed that political parties should be self-financing. Yet his own political activism was unanimously viewed as “worthy, but strange”. Despite his best efforts, the prevailing view of his colleagues was “why on earth would you want to join a political party?” For these wealthy, Conservative-voting, free-market, wealth-creators, they feel they can contribute to a Conservative government by placing their cross in the right box or by sending a cheque. The concept of joining was anathema.

In 2014 Sir John Stanley announced his retirement as MP for Tonbridge & Malling, a seat he had represented since its creation in 1974. The Association Officers thought this was an ideal time to invest substantially in a recruitment campaign. Twenty thousand Conservative pledges duly received an invitation to join, with the added bonus of being able to help choose the constituency’s next Parliamentary candidate, something which had not happened for four decades.

The Chairman thought it would result in one thousand new members. I was less optimistic and would have been happy with a response rate of 1% (or 200 members). The reality was fewer than 50. If the opportunity to join a well-run, vibrant and successful Conservative Association at the time of a Parliamentary selection achieved such a poor response, then what could we possibly do to reverse the trend?

It was as a consequence of this that Tonbridge & Malling decided to run an Open Primary. This attracted around 700 attendees of whom over 50% were non-members. After the event I cross-referenced the attendees with our database and discovered that 90% had received an invitation to enrol, but had not responded.

This large group of people were happy to register to attend, to provide their email address, to give up four hours of their Saturday, and even to contribute generously to the financial appeal. Yet none wanted to join the Party. Until we identify why, I suspect we will never address our dilemma over membership.

Since 2014 our focus in West Kent has moved away from membership recruitment and instead we have concentrated on recruiting donors and activists, achieving in many cases quite remarkable results.

Our “Registered Supporter” scheme has enrolled 2,000 people, around 20% of whom are now in some way active locally; another example of how people are willing to commit, but not to join. Our Chairman, William Rutherford, wrote about this on Conservative Home last year http://www.conservativehome.com/platform/2015/05/william-rutherford-we-urgently-need-to-rebuild-party-membership.html

Most West Kent Associations now have as many donors as members. Many of these people contribute significantly more money via appeals, raffles and sponsorship, than our members do through their subscriptions.

And most recently a “Subscribers’ Club”, fronted by Ann Widdecombe, enrolled 800 supporters, who between them contribute £24,000 per year; more money than every new member we have recruited in the last 5 years combined. Over 70% of these are non-members.

I would be happy to be proved wrong, but I suspect the days of mass membership are behind us. But that does not mean that mass participation is also over. One discussion we must have is what we actually wish to achieve. Do we want participation to help define policy? Or to raise funds? Or to recruit an army of activists? Perhaps a mix of all three.  Whatever the reason, there may be simpler ways to achieve our goals.

Our members are valuable, dedicated and committed people, and without their generosity and support our organisation simply wouldn’t run as efficiently as it does. But they are one stream of support in what is an increasingly complex pattern of involvement. As we build the Party of the future, we need to either identify and remove the barriers that clearly stop people joining, or accept that these barriers exist, and engage people on their terms, rather than insisting that they become active on ours.
Posted by Andrew Kennedy at 00:52 1 comment:

Just because it's new and different, it doesn't mean it's bad!

I find it frustrating though not surprising that almost every change I have tried to implement has at first been met with resistance, (sometimes bordering on hostility) followed by gradual, begrudging acceptance. And at times, when things have been an outstanding success, I have even heard people claiming "well, I supported this all along..."  Who was it who said, "success has many fathers, failure is an orphan"? 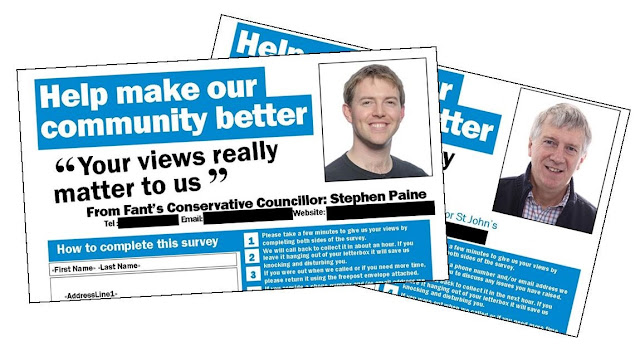 I cannot take any of the credit for creating these, but I am certainly one of their greatest supporters. As is often the case, it's our more traditional members who are suspicious about it, with younger activists happy to go with the flow.

Very recently I turned-up at a Campaign Day with a box full of KDC scripts. "Oh I hate this" said a longstanding member of the team. "I didn't know you'd ever tried it," I said. "I haven't, but it's new and I don't like anything new."

In the post ward years and up to the 1983 election probably 90% of voters supported one of the two main parties and most people were ideologically committed,with a small pool of swing voters in the middle. In such a "black and white" world where everyone was red or blue, a simple "may we count on your support?" was probably enough.  These days it's not so simple. For most of the last 30 years the two main parties have polled around 65% and tribal loyalty continues to diminish. Conservatives lend their votes to UKIP at European Elections and Labour supporters happily switch to SNP, Green or Respect with the prevailing wind.  As the electorate has become more fickle in their behaviour so the technology needed to identify and track our supporters has had to change too.

The question "On a scale of 0 to 10 how likely are you to support each of the following parties" is the one which tends to irritate our traditional campaigners, as it fails to result in a C or S on the canvassing card.  What it does do, however, is provide us with a picture of voters most likely to support us, those who will need encouragement, those who need to left alone and those who could be persuaded, along with the messages needed to do so.

For example, last year we fought and won a by election in one of Kent's most marginal council wards. During the campaign we identified around 900 residents who put Conservative higher than any other party (pledges). However many of these put us on 8 and the LibDems on 7 or us on 6 and UKIP on 5. By knowing which Conservatives were also favourable to the LDs and which were also considering UKIP we were able to tailor our GOTV messages accordingly. Similarly, we knew the whereabouts of 93 UKIP voters who would prefer a Conservative councillor to a LibDem councillor; valuable data in a ward where the likely majority was estimated at 50 votes.  None of this information would have been available to us had we only done traditional canvassing.

So next time your Agent, Campaign Manager, Deputy Chairman Political or Field Campaigner introduces you to a new campaign tool, please give it your best shot and don't dismiss it simple because it is new or different. Full colour leaflets, computerised Campaign HQs, mobile telephones and email were all "new and different" once - it didn't make them bad!
Posted by Andrew Kennedy at 17:35 1 comment: 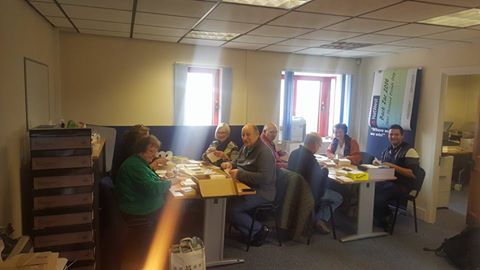 Same again tomorrow!
Posted by Andrew Kennedy at 11:46 No comments:

A clenching of buttocks and a biting of lips

Last night West Kent hosted our fourth "An Audience with...." when we welcomed Margaret Thatcher's official biographer and former editor of The Telegraph and Spectator, Charles Moore. Mr Moore was interviewed on stage by Tom Tugendhat MP in front of an audience of almost 200. The event raised over £2,500 for Association funds. 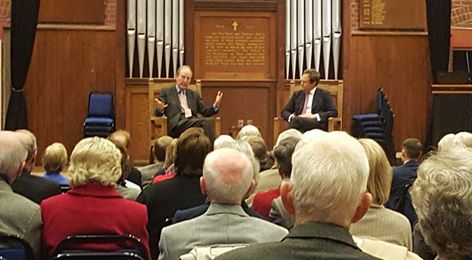 As is often the case at such events, the Q&A session unearthed some of the most interesting responses, including this question from a member of the audience...

"Mr Moore, towards the end of her period in office Mrs Thatcher seemed to surround herself by left wingers and wets, whilst leaving her true supporters languishing on the back benches. Why do you think this was?

Charles Moore replied with brutal honesty.  "I think the problem she had was she was fishing in a shallow pool of talent, and sadly for her, most of the available talent was coming from the left wing of the party. The right wing was exhausted and what was left provided very slim pickings indeed."

Around the room there was a clenching of buttocks and biting of lips as a silent waive of sympathy surrounded the questionner - a former right wing MP was was never promoted and was clearly still seeking an explanation almost 30 years later!
Posted by Andrew Kennedy at 09:53 No comments:

A friend of mine was sorting through a box of old election literature yesterday and came across my leaflet when I first stood for council in 1990.  I was 24. His comment, "you were almost a twink". If you don't know what it means, Google it!

I'm not sure if I was more complimented on being referred to as a "twink" or more offended at the inclusion of "almost". Anyway, being Friday (and to prove I was young and fresh faced once) here it is.

Posted by Andrew Kennedy at 02:52 No comments: