Maybe it's a sign of getting old (I remember my mother and grandmother both saying how fast the weeks and months pass 'these days') but grumpy Monday mornings turn into Friday afternoon with increasing speed, leaving Jon and I questioning what happened to the week.

The volume of work is relentless and will only get worse in the weeks ahead. This week started mail merging letters to the Kent membership to raise funds for the forthcoming Police & Crime Commissioner Campaign. I am grateful to former Party Leader, Lord Howard of Lympne, for fronting-up the appeal. Example below. 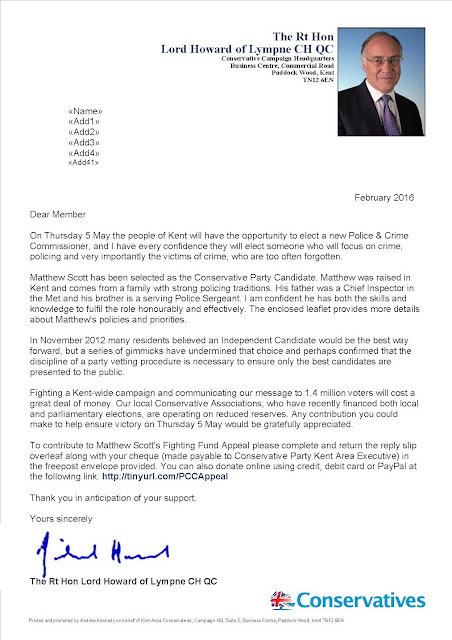 On Tuesday we finally completed the data entry for the last GE marked registers and marked PV registers. Data-capturing five constituencies worth (over 300,000 items of data) has been a mammoth task and I cannot express sufficient thanks to the team of over 40 members and supporters who came in day after day to get the job done. It is most unfortunate that we did not simply buy the marked registers in May (as we have always done in the past) when we could have completed the data capture over summer, but that's a lesson for next time!

The middle of the week was dominated by our usual hard working teams of packers, who this week packed and dispatched around 12,000 items of mail. These included the 5,000 Lord Howard letters mentioned above, 5,000 Voter ID surveys, three local mailings for Associations and around 500 membership cards. 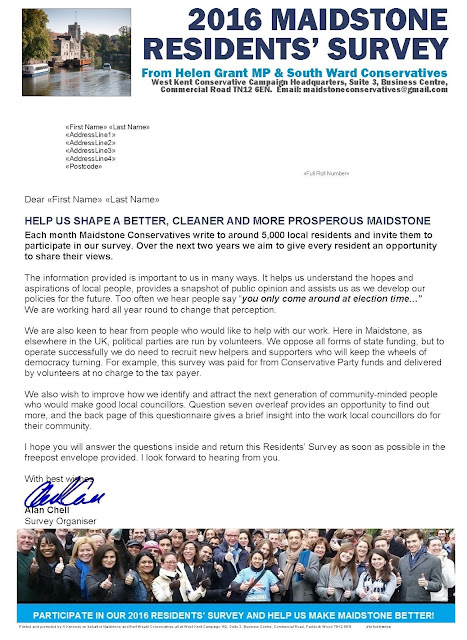 Today (Friday) we took delivery of 88,000 envelopes which next week will be shipped out to 140 volunteers for hand-addressing to pledges as part of our 2016 election campaigns. When I posted a photograph of this mountain on Facebook someone commented that asking volunteers to hand-address them shows what "disregard" some people in the party (ie, me) have for our members. My response below!

Jamie Myatt ·
Surely no? If true, it is a classic example of wasting volunteer's time and the disregard certain elements of the party have of supporters!

Andrew Kennedy what utter nonsense. We've been delivering hand-addressed pledge letter for five years now. It's nothing to do with disrespecting party activists and all about a form of communication which works. I actually strongly object to someone I have never met and who knows nothing about me or the work I do implying I get volunteers hand-writing envelopes as I disrespect them. The fact that I am able to raise a team of 140 volunteers happy and willing to do this, year after year, shows not only the strength of the team but the respect they have for my campaign skills. "Disrespecting" people is sticking a computer produced label on an envelope and expecting voters to be fooled by it.


And I am particularly grateful to one of our most regular and dedicated activists, Mary Streater, for her generous rebuttal;

Mary Streater As a volunteer I am aware that some elements of the party may disregard us - but that is so very not true of Andrew Kennedy. It is a joy to volunteer in the office he runs as he will never waste volunteers time or efforts as he always appreciates the work we do. I just wish all Agents had that approach.
Unlike · Reply · 4 · 5 February at 22:09

Also this week were two Association's Local Government Committee meetings, a Management Committee Meeting and a fleeting visit to Crowborough Constitutional Club to help our neighbours celebrate a stunning by-election victory, for which West Kent did the design and printing.

And we also sent the first 2016 local government election leaflet to print!

Finally this week Jon and I turned our attention to next week's big project; a postal vote recruitment campaign aimed at around 70,000 carefully targeted Conservative pledges across Kent. Bring it on!
Posted by Andrew Kennedy at 02:27